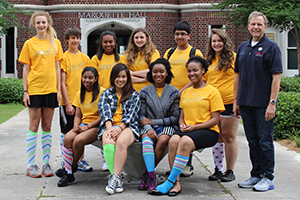 Ben Franklin High School is located on the University of New Orleans campus in New Orleans, Louisiana. With approximately 800 students enrolled in 9th – 12th grades, high schoolers are encouraged to emulate the same curiosity and creativity as one of the first great Americans, President Benjamin Franklin, while actualizing “their own power to think, to invent, and to understand.” Fourteen students, a combination of 9th and 10th graders, participated in SHOREline during the 2013-14 academic year. During this period, the Franklin chapter focused on the theme that following a disaster, many children lack the avenue to express their emotions openly and free of judgment. As a result, the Franklin students worked diligently, along with their teacher-sponsor, Mr. John Parauka, to create a project called Artistic Relief and Therapeutic Support for Youth, or A.R.T.S.Y.  Through A.R.T.S.Y., the Ben Franklin SHOREliners seek to provide an opportunity for young children who are emotionally distressed as a result of disasters to find a safe haven to express their emotions in a fun way through creative play-related activities. 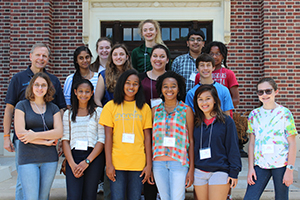 The Ben Franklin chapter returns to the SHOREline network for the 2014-2015 school year as an extra-curricular program – facilitated by Mr. John Parauka.

For the 2014-2015 school year, the Ben Franklin team has begun identifying elementary schools within the Orleans Parish school district to pilot the A.R.T.S.Y. program. After spending countless hours during the 2013-2014 school year developing and testing curriculum, creating training videos and safety protocols, and undergoing thorough background checks in order to the ensure safety of the young children they will be working with, the students are ready to implement A.R.T.S.Y! The pilot program will help the students evaluate the efficacy of their program during a time of non-disaster so they are ready to deploy should a disaster strike.