Lessons for confronting future outbreaks and why the President’s proposal for emergency Ebola funds is a step in the right direction. 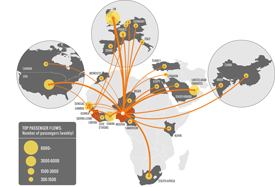 Globalization has presented unprecedented challenges to the prevention and control of disease outbreaks. While diseases such as smallpox and measles were already able to travel around the globe within a year by the time of the European colonization of the Americas [1], in today’s interconnected world infectious diseases can reach virtually any location within days. Every week, tens of thousands of passengers arrive to and leave from West Africa, the epicenter of the ongoing Ebola epidemic (Figure 1). Even more strikingly, the time sufficient for a disease to reach any location around the world is often shorter than its incubation period [2]. For instance, the Ebola virus has an incubation period of 2-21 days after infection [3] which, as the recent U.S. cases have demonstrated, can often result in exposing many more individuals before the patient is diagnosed with the disease. Not surprisingly, Ebola has caused multiple deaths in Western countries (Figure 2) and even countries like Denmark where risk was thought to be ‘negligible’ [4] have had suspected cases. 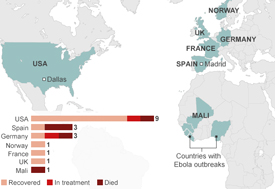 Although the current outbreak is likely to remain restricted to isolated cases in the United States, it has presented an opportunity to learn important lessons about confronting future outbreaks of this and greater magnitude. The nation’s ability to rapidly and effectively respond to such threats will require a comprehensive long term approach that incorporates improved domestic preparedness with considerations of the key stakeholders involved and various local and global factors that may exert complex influence on the disease epidemiology.

First, ensuring domestic hospital preparedness will be of paramount importance. The Ebola outbreak revealed substantial gaps in preparedness that call for urgent measures. For instance, although the level of hospital preparedness to Ebola is difficult to assess, a survey of 700 nurses at over 250 hospitals around the country revealed that 80 percent were unaware of a hospital policy regarding the admission of suspected Ebola patients as of last month [5]. About 18,000 nurses at Kaiser Permanente-owned hospitals and clinics in California went on strike this Tuesday over a perceived lack of equipment and training to adequately respond to potential Ebola cases [6].

Next, as the current situation in Liberia, Sierra Leone and Guinea clearly demonstrates, fragile health systems don’t have the capacity to effectively respond to emergencies like Ebola. Furthermore, the unprecedented Ebola outbreaks in these countries have led to the collapse of the local health systems and have evolved into humanitarian emergencies that will have long lasting and devastating consequences for public health, education and economic development [7,8,9].  Beyond the moral obligation to assist countries affected by Ebola, the United States can benefit from such actions because reducing impacts in the affected countries is essential for minimizing the likelihood for new cases at home. Therefore, an ongoing commitment to strengthening weak public health systems in developing countries, with particular focus on disease surveillance and response capacity [10] will likely be especially beneficial in confronting future outbreaks of this kind.

Finally, while globalization has brought many new challenges, new opportunities are also emerging for confronting future health emergencies. In particular, global and cross-sectorial partnerships play an increasingly important role in the Ebola outbreak response and technological advances are improving surveillance capacity.  Governments and NGOs are developing collaborations to create treatment and testing facilities and send health care workers to the affected countries and partnerships involving biopharmaceutical companies are being realized [11,12] to facilitate more rapid vaccine and drug development. IBM has recently launched an initiative to create a ‘cloud-based Ebola Open Data Repository’, in order to provide governments, researchers and NGOs with access to openly available data that can be helpful in improving disease surveillance and response [13].

In a globalized society, the success or failure of the nation’s ability to respond to such health emergencies will depend on our health system’s preparedness, as well as our commitment to strengthening health systems worldwide and fostering successful collaborations with stakeholders from government, non-profit and industry domestically and abroad. The President’s proposal [14] for $6.18 billion in emergency funds to contain and end the Ebola outbreak is a step in the right direction. The proposal that aims to improve domestic preparedness, enhance global capacity to swiftly and effectively respond to future disease outbreaks and accelerate drug and vaccine development will not only serve the goal of ending the current Ebola outbreak but will also provide a solid foundation for meeting challenges of this or greater magnitude in the future.