Climate Change as a Human Factor

Climate change is defined as change in global or regional climate patterns, which may include increases and decreases in temperature as well as changes in severe weather events. These changes in severe weather may increase both the frequency and intensity of disasters and the likelihood of mega disasters. Climate change will likely affect most severely individuals that are already more vulnerable such as older persons and children, those that are socially isolated, people with various health conditions, and those of lower socioeconomic status. 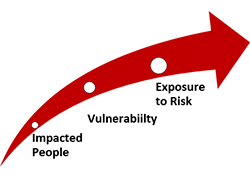 With an increase in population, comes an increase in amount of people during a crisis, including vulnerable individuals. And with the potential for more frequent and/or severe disasters, their risk for future exposure will ultimately increase (Figure 1). It‘s very challenging to tackle such vulnerabilities, as they’re often multi-hazardous, coupled by ecological, geopolitical, demographic and ethic standpoints.

The National Center for Disaster Preparedness (NCDP) is incorporating assessments of climate-specific impacts and vulnerabilities in its work on planning for, responding to, and recovering from disasters, connecting research, policy, and practice (Figure 2). Assessing climate change impacts on populations and climate adaptation strategies provides NCDP the opportunity to carry out research that’s directly related to policy and practice. We approach this work from a disaster research paradigm, utilizing environmental epidemiology methods as well as climate information and projections to characterize health impacts and applying the preparedness, response and recovery principles to various case studies and scenarios. 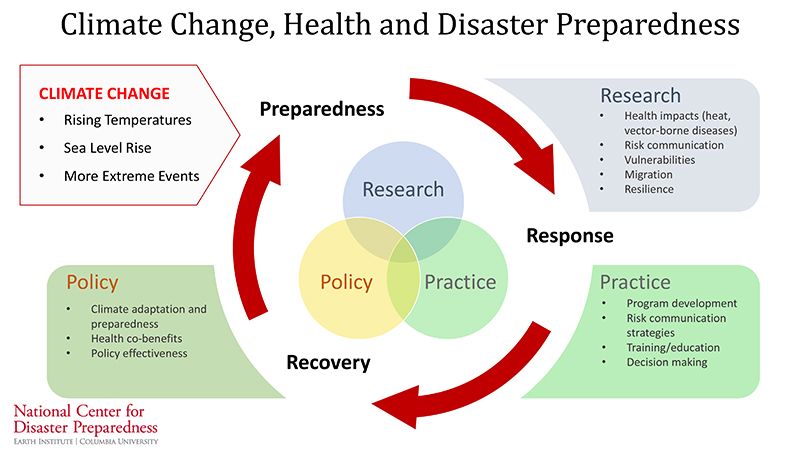 In October 2015, the National Center for Disaster Preparedness (NCDP) hosted a seminar at Columbia University titled: Growing Up in an Era of Extreme Events, to explore what we’ve learned from crisis such as Hurricane Katrina and Super Storm Sandy. This seminar focused on how to understand and improve our nation’s capacity to prepare for, respond to, and recover from disasters.

This growing recognition to link climate change and disaster preparedness is through climate adaptation—where we plan for big scale emergencies through planning prevention interventions. This is why the center believes that practical knowledge on a local level, will serve as an optimal community engagement effort in resiliency. Learning about the current risks of human vulnerability, such as the Syrian Refugee Crisis—NCDP for the next decade will prioritize efforts in preventing, preparing, and responding.

In December 2015, 195 countries adopted the first-ever universal, global climate deal at the Paris climate conference (COP 21).  According to the global action plan adopted by the governments, the world must take the necessary steps to minimize climate change and its impacts by limiting global warming to well below 2°C. Governments agreed on the importance of adaptation actions and in particular on the urgent need to strengthen societies’ ability to deal with the impacts of climate change. There has never been a more critical time to work towards improving adaptation to climate-sensitive disasters by applying lessons learned from past events to the way we prepare, respond, and recover from future disasters.