Between April and October 2012, a household survey and a community engage effort were conducted. The methodology used to interview participants was as follows:

Once we had identified the fifteen highly impacted communities based on BP claims data and NOAA oil monitoring data, we randomly sampled census blocks within each of these. With the census blocks being the smallest geographical area used by the US Census, the average block we sampled had 130 households living in it, with most falling in the range of 10 – 400 households. We limited the study to census blocks where at least 70% of the households were occupied, so that we wouldn’t be selecting areas that were predominantly vacation rentals. 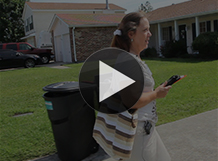 From April through August 2012, the interviewers knocked on 6,800 doors across the four-state region. In order to be eligible, a household had to have a child between the ages of 3 and 18 living in it, and an adult parent or caregiver present. Our team of community-based interviewers conducted brief ten minute interviews with parents or caregivers in the homes they approached. We found 1,700 eligible households that met these criteria and interviewed 1,437 parents.

The team used cutting edge technologies, including tablet computers for data collection and mapping, customized databases, and software applications, all of which allowed real-time transfer and analysis of data from the Gulf Coast field effort to the Columbia offices (AT&T, our mobile service provider, dispatched a film crew to document our innovative use of technology). Visit our Mobile Research page to learn more about this technology.

From the survey data we selected four communities from among the fifteen for the Community Engagement phase. We chose the four communities where parents in the survey expressed most concern about health effects – two were in Louisiana, one in Mississippi, and one in Alabama. We invited key community leaders, health providers and administrators, advocates and service providers to our small-group meetings. In addition, we ran two to four parent focus groups in each of the four selected communities, including one in Spanish and two in Vietnamese.

In each of the four target communities, we conducted a series of key informant interviews and focus groups with the following knowledgeable persons: health care providers including, among others, pediatricians, school nurses, mental health counselors, and licensed social workers; health center directors and other health administrators; local officials, school administrators, and other community leaders; advocates from nongovernmental organizations, non-profits, religious institutions, childcare centers, and other groups active in the communities we visited; and parents and grandparents.