The consequences of climate events are not borne equally. Local populations cope with drought in the arid Sahel much differently than those adapting to the same event in southern California. In their destructive path, human-caused climate changes and disasters, from ongoing drought to unpredictable floods, hit the poor the hardest – physically, economically, and socially. These are sentiments increasingly recognized in the global community, and reiterated by United Nations Secretary General Ban Ki-moon at the opening of the 2015 Paris Climate Conference when he spoke about the unequal impact of climate change in the developing world [1]. Globally and in the U.S., individuals that are already vulnerable are likely to suffer disproportionately as a result of the changing climate.

The Burden of Poor Nations

Climate research is continuously reaffirming that the most vulnerable states are currently and will increasingly bear the consequences of climate change.  Differential vulnerability due to uneven and more fragile development progress create vastly different risk profiles for countries in facing this phenomenon [2]. To understand this differential burden at the international level, the small island nation of Kiribati is instructive [3]. Kiribati, a small nation composed of 33 coral islands with a total population of 105,711 is located in the middle of the Pacific Ocean. Although it only has a minute contribution to global climate change, it is gearing up to be among the first nations whose entire existence is threatened by the changing environment.

Kiribati ranks as one of the lowest emitters of carbon dioxide on the planet, yet is already preparing for a future drastically impacted by environmental degradation driven by larger, high-polluting countries [4] [5]. Because of Kiribati’s low elevation and limited potable water sources, sea-level rise, rising air and sea-surface temperature, ocean acidification, changing rainfall patterns, and unpredictable climatic events threaten its way of life. Ambient air temperatures have risen by 1 degree Celsius since 1950, and the sea-level around Kiribati has increased by 3.9 millimeters per year since 1992 – three times faster than the global average [6]. A startling 94% of those living in Kiribati have already been impacted by climate change. Climate modeling by the Institute for Environment and Human Security predicts that in the next 40 years, internal migration within the country will increase by 100%, with mass movement expected into the capital city [7].

The Invisible Nexus of Climate Vulnerability, Poverty, Age and Gender

It is important to recognize that climate change does not discriminate, but personal characteristics such as poverty greatly impact an individual’s ability to cope and respond to the climate change [8]. Climate disasters do not discriminate. Rather, it is the underlying structural inequalities which largely determine who will be able to cope best and bounce back fastest. The social, physical, and political dimensions of poverty, age, gender, social exclusion, and weak infrastructure increase individual vulnerability in the face of climate change [9].

For the rural poor, this risk might manifest as limited land ownership, a systematic lack of livelihood diversification, and sensitivity to fluctuations in the food market. Food prices and agricultural production channels in particular have been a focus for researchers as a principal pathway through which climate change has the potential to exacerbate poverty [10]. For the urban poor, risk may take the form of inadequate infrastructure and hazardous working and living environments. Though the risk attributed to poverty manifests differently for these two groups, both are left less capable of responding to extreme climate events than their wealthier community members.

In addition to making-up a disproportionate share of poverty worldwide, women also face a slew of unique structural disadvantages in social and behavioral expectations, land ownership rights, and access to resources and services. When these constraints come into play in the context of climate change, girls and women, particularly in rural developing areas of the world, are left at a stark disadvantage in being able to cope resiliently to changes in their natural and social environment [11]. For instance women and girls are often responsible for household work such as finding food, collecting water, and securing energy for cooking and heating [12]. Oftentimes, these same resources are used by them for income-generating activities in social environments where other jobs in less climate-sensitive fields such as technology are not readily available. Thus, when climate change strains the environment, the security of girls and women falls immediately under threat.

Finally, younger and older individuals are at increased risk for experiencing adverse impacts due to the changing climate. For instance, according to WHO estimates based on the disability-adjusted life year (DALY) measure, children carried over 88% of the global burden of disease due to climate change occurs as of 2000 [13]. The elderly are particularly vulnerable to climate-sensitive disasters such as heat waves. For example, the 2003 European heat wave resulted in more than 70,000 heat-related deaths, the majority of them among the elderly.

Turning up the Heat for Civil Conflict

The effects of climate change have also been attributed to displacement, and potentially, civil unrest. In a recommendation report on climate change and human mobility for COP21, the Advisory Group reported that evidence from past and recent events show that weather-related disasters have resulted in significant levels of population displacement across the globe [14]. Considering the impact of sudden-onset, weather-related hazards alone, the Group reported that at least 22.5 million people have been displaced every year from 2008 to 2014, and that this alarming phenomenon is on the rise [15]. In addition to forced migration due to extreme weather events, there is concern that climate change is stirring the pot for regions already at risk of civil unrest. The years leading up to the onset of the Syrian Crisis in 2011 saw a multi-season period of extreme drought that contributed to what has been described as historic agricultural failure [16]. The drought, coupled with the livelihood-crippling lack of crop yields, pushed rural communities into the cities, negatively impacting urban employment and adding to the tinder for social unrest [17].

A Problem at Home

It might be easy to see these climate vulnerabilities exclusively as issues of the developing world, but the risk differentials translate into U.S. communities as well. Studies on the impacts of major disasters such as Hurricane Sandy and Hurricane Katrina show that poorer populations are more likely to face the negative impacts of these events, due in part to factors such as limited institutional support and social capital [18]. Poverty, social isolation and older age were among the leading vulnerability factors during the deadly heat wave in Chicago in 1995 [19]. In short, climate change exacerbates the disadvantages and inequalities already existing in the population.

As the post-COP21 momentum continues to spur conversation and action around climate change, it will be crucial for decision-makers to understand the vulnerabilities of populations differentially affected by the changing environment, and to use this information to strategically address our changing world.

Back to
PERSPECTIVES
Other Perspectives 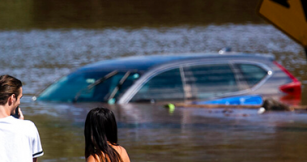