Some information about the methodology used, and preliminary findings:

A systems analysis approach was used to evaluate to public health response based on triangulation of (1) one-on-one interviews with multi-sectoral key informants (n=21) and subject matter experts (n=8), (2) focus group discussions (n=2) and invited meetings (n=8), and (3) process evaluation of stakeholder meetings. We have also used content analysis of situation reports, annual reports, and after action reports to validate the qualitative findings. 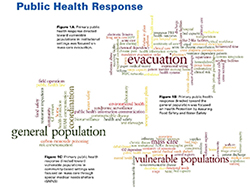 Findings obtained thus far indicate that there were several surge capacity challenges during Hurricane Sandy involving the transfer of patients to and from hospitals, nursing homes and special needs shelters. In many instances, the public health agencies received requests to carry out tasks that were beyond their purview, often resulting in improvised decision making processes that have not been analyzed extensively in previous research studies. During the second year of this project, the investigators are also carrying out disaster response trainings in relation to identified gaps.