The one-year anniversary of Superstorm Sandy serves as a critical checkpoint for residents and communities affected by the storm. The question most often posed is, “Have we recovered?” Have residents and neighborhoods rebounded from the effects of storm surge, flooding, evacuation, and displacement? Have neighborhoods been rebuilt?  Are all the critical lifelines and services restored? And have we learned the lessons that will lead us to be prepared next time?

Predictably, the answers are ambiguous. There is no single “recovery snapshot” or data repository to which to turn, and the answers one gets to those questions depends on who is being asked.

Recent news reports indicate that in New Jersey, as many as 26,000 displaced residents have not yet been able to return to their homes or to find new permanent rental housing. Similar estimates for New York City and New York State have not emerged in the media, but in October, The American Red Cross stepped in to provide financial assistance for several hundred still displaced city residents who were about to be evicted from the hotels where they have been living since Sandy. In September 2013, USA TODAY reported that “Sandy left N.J. Shore with Massive Mold Problem,” reflecting the reappearance of mold in homes that had been treated improperly by unqualified contractors and emerging health problems.

Beaches and boardwalks along the affected coastline were mainly rebuilt, although there are clearly significant pockets awaiting reconstruction and restoration. Hospitals, clinics, nursing homes, and other health care facilities have begun to think about how they can collaborate in the future, and how to more efficiently manage large-scale patient evacuations or sheltering operations while assuring patient continuity of care, but that is a long complex process that may be years from completion.

And for many people, individual and household-level recovery remains a long and difficult process, both in terms of economic and housing rebounds and in terms of psychological and emotional well-being. In the immediate days and weeks after Sandy we spent time with our colleagues at the Children’s Health Fund (CHF) conducting site visits in the Rockaways, Brooklyn, Staten Island, and New Jersey, and the immediate needs for food, power, hot water, and medical care were obvious. Our experience from having witnessed so many other disasters, though, also prompted us to think about the seeds of long-term recovery in those early days. We looked for evidence of those early roots of recovery, and have continued to look for these signs of adaptation and renewal, and have seen both positive and troubling signs.

In Gerritsen Beach, a Brooklyn coastal community of approximately 2,000 households where CHF has partnered with the community to provide mental health services for children and adults, we have seen both promise and pitfalls. This mainly blue-collar middle-class community, with very strong neighborhood ties in which multiple generations of families have settled within blocks of one another, has struggled to rebuild itself. These residents are unaccustomed to asking for help, and more often than not are themselves the providers of help, as civil servants, first responders, construction workers, and service providers. Over half the housing in this neighborhood suffered significant damage, as a tidal surge of eight to ten feet of water washed through the community in ten minutes time during the storm. Lost in the flooding, though, were many of the hand tools and power tools that residents needed to help themselves rebuild. Their efforts to turn to one another for help were compounded by the fact that everyone was affected. If one walks the streets of Gerritsen Beach today, or the Rockaways or other flooded communities, the lasting effects of the storm may be faint watermarks on the outside walls of homes.  Invisible to passersby is the ongoing interior destruction – homes still awaiting sheetrock, or those that need second and third rounds of mold remediation after initial efforts failed.

It is, perhaps, an apt metaphor for individual well-being as well.  From the “outside,” many people who had been exposed to the storm have only faint traces – if any – of the storm’s effects. It is the internal effects which have been equally devastating, enduring, and are often invisible to the casual observer.

What follows is a brief round-up of some of the metrics of recovery we have been able to identify:

As of August 31 (the most recent date for which numbers are available), only $11 billion (23%) of the $48 billion appropriated by Congress for Sandy relief (post sequester) had been obligated and only $5.2 billion (11%) disbursed, according to the reporting by the federal Hurricane Sandy Rebuilding Task Force. More than 80% of the funds disbursed represented payments by FEMA under the Stafford Act.

As of this same date, HUD had disbursed less than 1% of the more than 15 billion it received for housing and community development purposes; those funds were to have provided a $5 billion down-payment  for ambitious rebuilding programs proposed by New York State, New York City and New Jersey.

The Department of Health and Human Services had reserved $475 million of its congressional appropriation for supplemental social service block grants (SSBG) but neither New York State nor New Jersey—the beneficiaries of the two largest set-asides of these SSBG funds—had yet made their own decisions about which local organizations should receive those funds. New York did not announce its awardees until October 10, and as of this posting (10/25/2013) New Jersey had not yet announced how it would allocate its SSBG funds.

There is even less readily available information about the number of people who have received various kinds of public assistance for housing, health concerns, small business losses, other types of disaster losses, or disaster case management.

Perhaps most discouraging of all, there is so little information available about the scope and magnitude of the remaining need. Think for a moment about two closely studied areas of disaster recovery, housing and mental health. Much post-disaster research suggests that the longer people are out of a stable housing situation and the more moves they have to make from one temporary housing setting to another, the slower and more tenuous their economic and physical and mental health recovery will be. Stable housing seems to be a core, bedrock requirement for getting one’s life back in order.

But getting good data about how many people regional government agencies have helped with housing assistance can be difficult. On October 22, 2013, for example, a New York City deputy mayor told a press briefing that “the vast majority of the 24,000 homeowners who applied for the city’s ‘Build it Back’ program are back in their residences,” but you cannot confirm that number on a City website. Nor can you find either the percentage of the estimated 69,000 damaged or destroyed New York City residences that have been repaired, or the number of displaced families that still lack a permanent residence, even if different from the home they occupied before Sandy.

Likewise, the facts that FEMA had approved 61,376 New Jersey applications for Stafford Act Individual Assistance and more than $357 million of Stafford Act housing assistance in New Jersey by October 2013 appear to indicate a concerted and diligent FEMA effort to get people back in their homes. But how much of this housing assistance went to repair damaged homes versus pay for temporary lodging in motels? How many of the nearly 55,000 housing units destroyed or severely damaged in the Garden State have been repaired? Standard-issue FEMA statistics like these don’t give you a clue:

FEMA data on Activity under the Stafford Act’s Individual Assistance Program Through 10/25/2013:

Prior disaster research also has established clear and compelling links between exposure to natural disasters and increased levels of anxiety, depression, post-traumatic stress disorder, and strained marriages and family relations. Participants in an October 2013 mental health conference in Toms River convened by the Robert Wood Johnson Foundation indicated that such symptoms and behaviors are prevalent in the portions of New Jersey ravaged by Sandy.

Yet someone who wanted to assemble even a rough quantitative estimate of how these symptoms endure in the Sandy-impacted population a year after the storm will get little help from public sources or anniversary assessments.

It is extremely heartening to know that the New York State Office of Mental Health Services, through its federally-funded Project Hope, provided individual or group crisis counseling services to nearly a quarter of a million New Yorkers in nine counties affected by Hurricane Sandy. But it’s quite discouraging to be unable to find on any New York State, FEMA or SAMSHA website any kind of estimate of how many people (including those already touched by Project Hope) remain in need of mental and behavioral health services due to exposure to Sandy.

THE PROBLEM OF NUMERATORS AND DENOMINATORS – WHO IS AT RISK?

The data above underscore one of the fundamental problems about the business of measuring disaster recovery. Too often we have numerators – numbers of people served, or numbers of dollars allocated or spent – but we don’t have an accurate denominator.  The denominator represents the population “at risk.” The denominator is the need, and the numerator reflects how much of that need has been met. Without the denominator we are left wondering: Are we doing well with our recovery efforts, or are we barely addressing our communities’ needs.

A denominator is exceptionally difficult to produce. For example, to find those in need of housing one would have to specify how many people (or households) have been displaced, are doubled-up with friends or relatives, are in transitional housing, or are homeless. To find the denominator that illustrates economic or mental health needs is even more vexing. This requires diligence, effort, and considerable political will.  Such effort is not beyond us. But we have to be willing to acknowledge that denominator, and not simply be swayed by the tug of the numerators.

Appointed by Gov. Cuomo, NCDP Director Dr. Irwin Redlener has served as co-chair of the NYS Ready Commission. Together with the NYC Ready Commission they published a summary of recommendations and progress update for the Governor on 10/28/13. Click the image on the left for the full report. 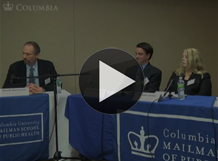 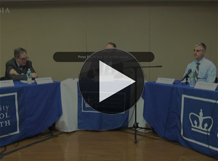