In an effort to highlight some important new research with particular relevance to the work around Children and Disasters, the Bulletin is taking a break from the traditional format. This edition of the Children and Disaster Bulletin: News, Tools, and Science will focus on the recently released research reports on the Hurricane Sandy Child and Family Health Study (S-CAFH). This edition of the Bulletin will walk you through key findings with particular relevance to households and the specific issues that were and are confronting the children of New Jersey.

Hurricane Sandy made landfall in Atlantic County, New Jersey at 7:30 PM on October 29, 2012. Residents from the rural towns on the shore of Delaware Bay up to Hoboken and Jersey City were hit as the superstorm ravaged the U.S.’ most populous state. In the wake of Sandy, where 117 lives were tragically lost, the affected areas were left with complex aftereffects on their population’s health, well-being, and property that are still being felt nearly 3 years later.

As collectively-experienced traumas, disasters can have severe physical as well as mental health impacts. In order to understand the breadth of the health, economic, environmental, and social effects of the superstorm that conventional statistical measures cannot capture, Columbia University’s National Center for Disaster Preparedness, New York University College of Global Public Health, Rutgers University Institute for Families with funding from the New Jersey Department of Health, came together to collaborate on the Sandy Child and Family Health (S-CAFH) Study. Initial findings are being released in the form of the four-report 2015 Briefing Report Series. Last week, the first two reports of the series were released.

The Person Report examines findings on the physical and mental health status and well-being of residents who lived in areas exposed to Sandy, paying particular attention to the impact the disaster had on children. S-CAFH’s Place Report focuses on issues surrounding Sandy’s relationship with housing damage and evacuation. For individuals of all ages, the loss of a home and possessions has a profound impact on emotional well-being. Along with the stress of securing new housing or repairing damaged homes, these factors can increase the risk of adverse health outcomes. Both reports examine these relationships.

“By far, one of the least understood aspects of disaster management is how to make recovery from catastrophic events efficient and rapid, so that people can return to a state of normalcy as quickly as possible.” 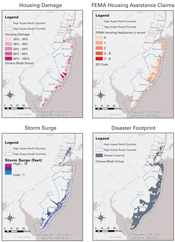 The study looked at residents who lived within the “Disaster Footprint” of Hurricane Sandy. This area includes the nine counties in New Jersey rated as having experienced a “very high impact” according to the FEMA Modeling Task Force Hurricane Sandy Impact Analysis. The initial sampling frame was then narrowed down using three geographical layers, which included 1) census block groups that experienced a storm surge of at least one foot, 2) census block groups in which at least a fifth of all housing units sustained “minor damage,” “major damage,” or were “destroyed,” as per FEMA assessments, and 3) ZIP codes which reported a greater than average number of valid FEMA Housing Assistance registrations. These three layers were overlaid so that a census block group that met any of the three criteria was included as part of the final Disaster Footprint population.

Through a stratified and random sampling methodology, the S-CAFH study selected approximately 1,000 New Jersey residents living within the Disaster Footprint to complete a one hour-long structured survey. In total, 1,047,000 residents lived in the disaster footprint – which all data were weighted to represent. For the Person Report’s section on youth, one child between the ages of 5 and 12 was randomly selected in each household with children. An additional series of questions about this child was posed to the adult survey respondent. View the detailed methods for more information.

The study also revealed troubling trends in post-disaster mental health issues on children. 18% of parents surveyed reported that their child experienced the symptoms of being sad or depressed, nervous or afraid, having problems sleeping, or problems getting along with other children after the hurricane. This rate rose to 42% among children who lived in homes with minor damage, 28% in children from homes that suffered major damage, and 35% in children who lived in homes earning less than $20,000 annually.

“This prolonged uncertainty and persistent trauma are very difficult for families and especially traumatic for children.”

Environmental hazard exposure and associated health consequences from Sandy were also a principal area of focus, particularly concerning mold exposure, mental distress, and asthma diagnoses. The study found that residents who were exposed to mold were twice as likely to also report moderate to severe mental health distress. Among the residents in the Disaster Footprint who had ever been diagnosed with asthma, nearly a fifth received their diagnosis after Sandy. Residents who were exposed to mold were also found to be more than twice as likely to be diagnosed with asthma after the disaster as those who had never been exposed to mold.

The more behaviorally-focused Place Report looked at patterns observed in the residents’ reactions to evacuation orders, their awareness of aid programs, and the groups that applied to assistance programs. This was critical for the S-CAFH study to examine, because the literature shows that displaced homeowners often seek housing in apartments, pushing out low-income homeowners and renters. This results in economically vulnerable segments of the population leaving their communities or becoming homeless as they search for alternative housing. Over the long-term, the burden of housing instability on displaced communities can manifest in an array of adverse well-being outcomes.

In all, of the approximately 110,000 residents in the Disaster Footprint who experienced major structural damage or destruction to their homes, an alarming 44,000 did not evacuate, including 9,000 who were living under mandatory evacuation orders. Interestingly, the study found that women evacuated at a rate of almost 30%, compared to men at just 16%. Another note-worthy observation were the evacuation rates that fell along New Jersey’s informal North-South divide. Culturally and socio-demographically, New Jersey is split between a relatively diverse and economically-disadvantaged north, and a more ethnically homogenous and wealthier south. Residents of South Jersey were found to have evacuated at a rate of 27%, while residents in the north left at a rate of 13%.

In the aftermath of Sandy, nearly half of the households that required services such as debris clean-up or furnishing replacements applied for assistance. Despite this, only a quarter of aid applicants in the Disaster Footprint were aware of New Jersey State’s Sandy Homeowner and Renter Assistance Program (SHRAP). Among those who were aware of SHRAP’s existence, only one in five applied to the program. An even more illuminating finding was that while those with the lowest incomes reported the most housing needs post-Sandy, those with the greatest income were generally more likely to apply for assistance.

Overall, the study found that housing damage can be a risk factor for poor health in a way that bears a striking similarity to the effect of poverty. Residents who lived in homes that sustained major damage, independent of their income, expressed health problems that were often mirror images of those living in deep poverty. Additionally, mold was found to have a double-barreled effect on post-disaster asthma diagnoses and mental health distress. Children who lived in homes that experienced minor damage were at a particularly high risk for psychological emotional issues, being over four times as likely to be sad or depressed, and over twice as likely to have problems sleeping. Decision-making patterns within the different groups living in the Disaster Footprint point towards a need for more nuanced risk communication, particularly in the face of the acute disaster vulnerabilities of low-income households. 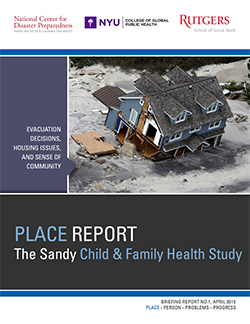 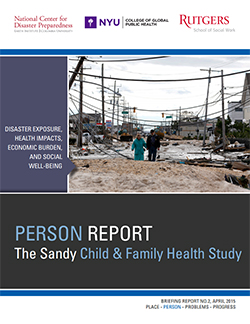